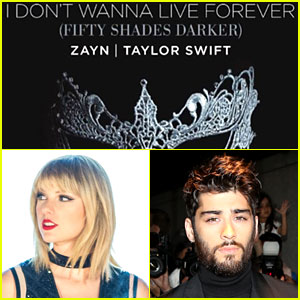 Just hours ago, Taylor Swift posted this photo on Instagram that shook the whole world.

I have to admit, I am not a fan of the Fifty Shades Trilogy. I’ve read all the books. But they’re not just the kind of romance novels that would stick  to my system and haunt me in my dreams. I, for one, writes erotic/romance novels and this is not the type of piece that would inspire me in writing my books.

However, when the first  film was released, I tried to give it a chance because I like the actors. Personally, I judge films for two reasons: first, the story/premise/script and second, the actors.

After all, I think Jamie Dornan is a perfect fit for Christian Grey. He’s hot, provocative, and mysterious. I just couldn’t shake off the thoughts that I have knowing that he’s a married man IRL and he’s doing all these sexy scenes. It makes me want to go wild watching him but something reminds me that I should be tamed. 😛

Going back to Taylor Swift and Zayn, I would say that this is the BEST collaboration of the year. I wouldn’t lie, Zayn’s a good R&B artist, obvs. Blending his vocals with Taylor Swift is just MAGICAL I can’t get enough of playing this track all over again. Those alternating musical riffs between TayTay and Zayn are just PERFECT.

So then  after Taylor posted the photo above, this teaser followed suit. Gigi Hadid (Zayn’s ever-supportive girlfriend) also posted  Zayn’s part of the song via Instagram story as she plays it via iTunes.

Maybe this song will motivate me to watch the film on Valentine’s  Day next year. Or maybe, they’ll help Fifty Shades Darker haunt me in my dreams once I witness how this track would be used in the movie. There’s just a lot of anticipation I couldn’t handle anymore!

I’ve also seen Jack Antonoff’s  (the music producer) tweet and he said this was produced in just a week–the fastest he’s ever worked on. The singers also recorded their parts separately. It was just unbelievable! This trio (TayTay, Zayn, and Jack)  are undeniably talented individuals.

Yes, I am claiming it. I am positive that there will be more surprises  next year. And I am hoping that this OST would be nominated for an Oscar. It would definitely be a throwback of the previous soundtrack  (Earned It by The Weekend) that was  nominated for Best Achievement in Music Written for Motion Pictures, Original Song.

Well, if that wouldn’t happen, then I don’t wanna live forever! 😛

Marge Serrano is smitten with the art of calligraphy, literary writing, and blogging. While she is a full-time copywriter, she still finds time to focus on her creative pursuits. Follow her on her little space on the web, Smitten Wordsmith! You can also find her on Facebook.